To install BleachBit, first download the latest installation package for your system.

Most Windows users want the standard installation. If you prefer to run in portably on a USB disk or on a system the administrators that prevents installation, use the portable installation.

Verify the installer is from a verified publisher (Andrew Ziem). 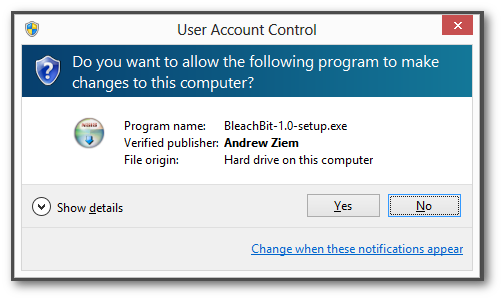 Silent installation installs the application without any prompts from the user, and it is typically used by system administrators to install an application across many systems.

Using BleachBit 4.4.1 as an example, run the following command to install the application for all users. It requires the calling process to have administrator privileges;

To install for only the current user, run this command:

To omit the desktop shortcut, add /NoDesktopShortcut directly after /S.

Because the installer is silent, it will not throw an error such as if you forget to choose between /allusers and /currentuser or if the calling process has insufficient privileges.

The /S and /NoDesktopShortcut switches are case-sensitive.

The switches /allusers and /currentuser were first added in BleachBit version 2.2.

The switch /NoDesktopShortcut was added in BleachBit 4.4.1.

Download the package which has a name like BleachBit-4.4.1-portable.zip. Then use a standard unzip utility to unpack the file. Such a utility is included with Windows: just right click on the .zip file and choose Extract all files which creates a new folder.